Despite being the most helpful and cheerful one, Lopamudra is one of the most misunderstood contestants. 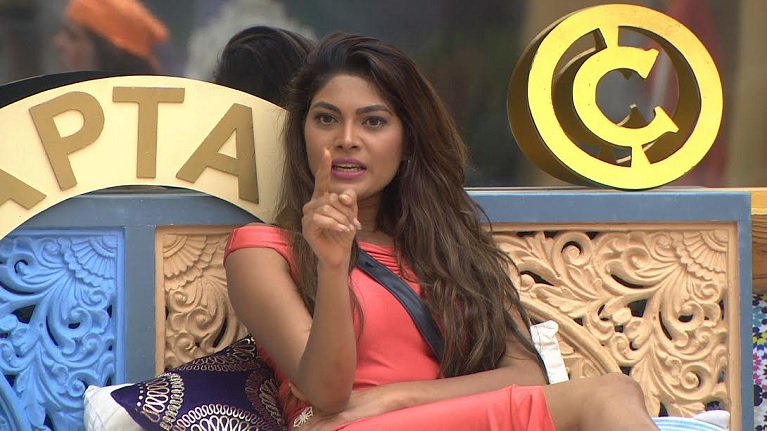 After winning the captaincy task last night, Bigg Boss asked Lopa to select 5 names who she feels that are worthy of a punishment. Firstly, we can clearly see that this was an attempt by Bigg Boss to purposely spark a conflict in the house. Lopa picked Om Swami and Priyanka Jagga because she had tiffs with both of them but when she picked Gaurav, Nitibha and Bani, it was clearly seen that she is doing it against her will. After the raining gifts task, Gaurav and Nitibha received their gifts and Bani, Om Swami and Priyanka were to be punished.
Bigg Boss asked Lopa to put two of them in the jail and one of them had to hold a board saying ‘Lopa, I’m sorry’ and roam behind her at all times. Lopa didn’t want Om Swami to tail her as she felt he has a very bad eye which sparked another debate. Lopa had a big fight with Priyanka in the morning and she wanted Priyanka to apologize to her and at the same time, she didn’t want Bani to suffer with Om Swami in the Jail. Lopa was in a situation that is like being stuck in between two warring nations! She doesn’t want Bani to suffer and Priyanka wasn’t listening to her!
At the end, after repeated warnings by Bigg Boss, Priyanka entered the jail with Om Swami and even Bani sportingly followed Lopa around with the board. Why we feel sad for her is that despite being the most helpful and cheerful one, Lopa came out as a bad person in front of her inmates. But since she sided with Bani and Bani sportingly completed the task, will Lopa and Bani patch up now? We so wish that they sort out their differences and that is because if Bani and Lopa team up, it would be very difficult to take them down!