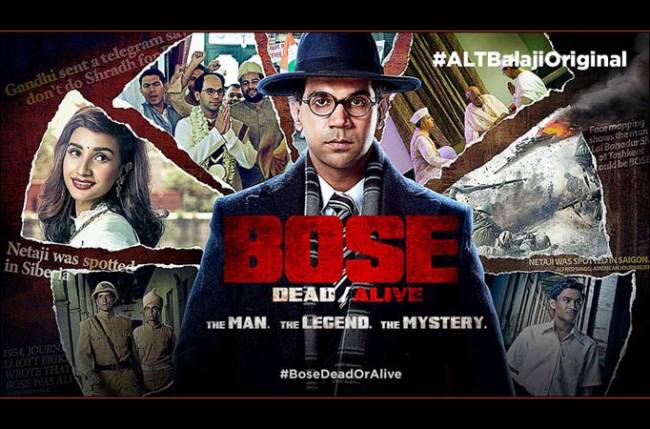 If one had to single out one actor this year for the most outstanding work in Indian cinema, it would have to be Rajkummar Rao who flitted from the flirtatious in “Bareilly Ki Barfi” to the portentous in “Newton”.

At the end of the year we saw Rao playing the much-misunderstood Subhas Chandra Bose in a series produced by Ekta Kapoor available on Kapoor’s streaming service AltBalaji.

The saga, directed by a young Bihari named Pulkit with an abundance of inputs from the series’ creative director Hansal Mehta, is spread over 9 episodes of 20 minutes each. I advise you to watch the entire series in one go to fully comprehend the resonant reach of the research that envelopes the gripping tale of a freedom fighter who defied Gandhian norms of anti-Colonialism to forge his own language of protest and to eventually form his own army.

So was Bose killed or not killed in plane crash?

The entire series is designed as cat-and-mouse game between various representative of the British Raj and Bose, Rajkummar Rao taking us through the various stages of transition in the enigmatic leader’s life with a sure handed cockiness that never suggests a shred of smugness. Yup, Rao is at the peak of his excellence and enjoying every bit of it without growing complacent.

Bose’s early scenes of youthful rebellion in Kolkata are shot with a spry mischievousness .In one sequence he beats a Gora teaher with his chappal for insulting the Hindu religion and walks away from the mayhem with not an iota of fear or remorse, as the background score erupts with a “Bose Bose!” chant that Salman Khan would have wanted in his next “Dabangg” film.

Patralekha (seen with Rao in the moving film “Citylights”) has a cute cameo in the first episode as a prospective bride for Bose who shares a stolen smoke with him on the rooftop. The cigarette smoking habit is clumsily incorporated. Rao doesn’t seem comfortable with the cancer stick.And that’s fine by us.

The writing borrows trivial vignettes from Bose’s life turning the bio-pic into a celebration of rebellious splendor unfettered by the rules of governance. I enjoyed the personal moments between Bose and his German wife Emilie(Anna Ador) and his insurgent allies more than the pointedly political run-ins with Gandhiji(played with reasonable credibility by Surendra Rajan) and Nehruji(actor Sanjay Gurbaxani strips the charismatic man of all charm and warmth).

The more ‘epic’ moments in the saga suffer from monetary constraints. Let’s not forget, this series is meant to be watched on mobile phones and computers. Not the best way to get to know a national leader who has for generations been much misunderstood and hugely maligned. However the key performers and some outstanding writing(Eklavya Bhattacharya, Jyoti Kapoor Das,Anuj Dhar, Reshu Nath) ensure our interest-level in the subtle often sharply executed flag-waving doesn’t flag.

Locations standing in for Manchuria, Vienna and other places that Bose resorted as Colonial fugitive have been chosen well and serve the series’ purpose effectively.

However the Britishers are portrayed as quasi-caricatures. Edward Sonenblick(seen giving company to Kapil Sharma in the recent film Firangi) struggles to imbue dignity in a role that’s purely a colonial cartoon. Besides Rajkummar Rao, it is Naveen Kasturia playing the conflicted havaldar Darbari Lal who brings an endearing worldweariness to the role of a British stooge who would rather not finger a fireball called Subhas Chandra Bose.The bantering between Bose and Darbari Lal contoured by the shifting loyalties is a highpoint in every episode.

This series dares. And for its audacity alone, it deserves our attention.