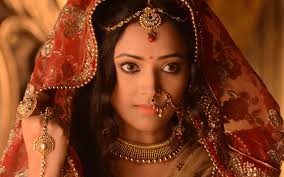 Pull up to watch the stunning performer!

The beautiful and phenomenal ‘Nandini’ of Indian television, who is killing it in Star Plus’ Chandra Nandini, is about to mark her comeback on the big screen.

Shweta Basu Prasad was honored with a National award at a mere age of 11, for her breathtaking performance in Vishal Bharadwaj’s Makdee. Shweta then disappeared for a while and was off the limelight after playing a remarkable role in Iqbal.

But it’s time for her fans to celebrate as Shweta is about to make her Bollywood comeback with Varun Dhawan-Alia Bhatt starrer movie ‘Badrinath Ki Dulhania’. Shweta will be seen playing Urmila, the hero’s sister-in-law in Shashank Khaitan’s romantic drama.

She was only a look-test away from bagging the role and she did it.

Shweta, while talking to a leading daily quoted how different her role is from what she’s done so far as a kid in Makdee and Iqbal. She also added that it’s a grown-up part in the otherwise glam film.

Shweta, who is very excited for the audience to see her in a completely different avatar shared an incident, recalling a fun conversation with Varun Dhawan. She mentioned how Varun teased her on remembering watching Makdee while he was still in school. She then explained to him that she too was in school at the time.

Shweta has been through a tough journey after her Hyderabad Police detention and her being out of work for such a long gap, but her hard work has finally paid off. Not only is she playing a warrior queen in a leading TV show but will soon nail her big screen comeback as well.