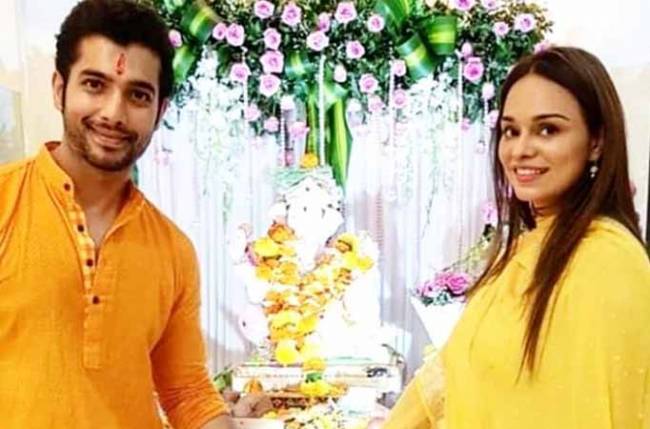 MUMBAI: Love is in the air and wedding bells are ringing for Ssharad Malhotra! Yes, the popular television actor has found his ladylove and is ready to tie the knot with her.

The Kasam Tere Pyaar Ki fame actor is in love with Ripci Bhatia, who is a Delhi based fashion designer.

Recently, Ssharad had said about Ripci to a leading publication, “What connected us probably was our fear of marriage. In fact, Ripci traveled the world for six years to avoid marriage, as the pressure on a girl at her age was mounting. I would have loved to do that, too, but I was constantly working. It’s only recently that our families got involved after we spoke over the phone for a few days. Both of us instantly realized that this is it and decided to take the plunge.”

While Ripci announced it to the world that he proposed her and she said a ‘yes’ to him on Valentine’s Day.

Now the actor has shared a lovely photo of the duo. In the photo, both of them can be seen posing in front of the idol of Lord Ganesha. In yellow attires, both of them are looking graceful.

“They say ur lucky …….I say, I’m lucky @ripci.bhatia,” the actor captioned the photo.

Previously, Ssharad was in a relationship with Divyanka Tripathi. He dated her for seven long years. Later, he dated Pooja Bisht for two years.