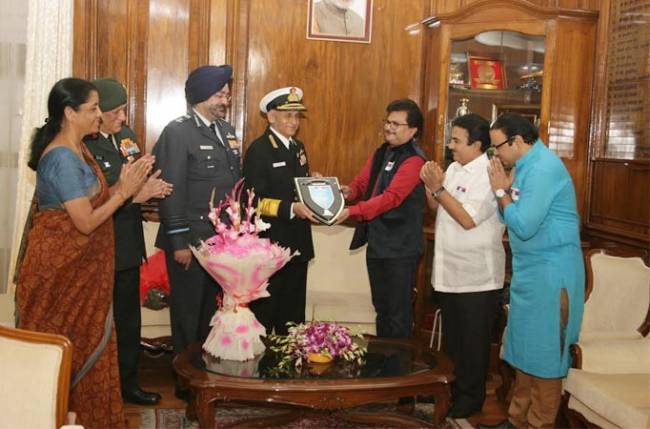 SAB TV’s Taarak Mehta Ka Ooltah Chashmah (Neela Telefilms) has always been on the forefront in raising awareness about various social issues and supporting causes. Along with handing out laughter and a constant message of Swachch Bharat, TMKOC has now taken on the mantle to honor our soldiers and encourage people to suppot the martyrs and their families.
The creator of the show, Asit Kumarr Modi and his team has extended support to the Armed Forces by creating a buzz about their flag day fund.
“Armed forces put their own life at risk to safeguard their country and its people. I honor and respect them and their courage. Individually and as a team, we are honour bound to support and show solidarity. We are trying to do the best of our capacity. We salute them,” says Asit Kumarr Modi.
The producer also visited Delhi to donate a cheque of Rs. five lakhs to the honorable Defence Minister, Srimati Nirmala Sitharaman ji for the cause. Dilip Joshi aka Jethalal and Mandar Chandwadkar aka Bhide accompanied him to Delhi where they also had the privilege of meeting the Chief of Army General – Bipin Rawat, Chief of Air Staff – Marshal Birender Singh Dhanoa and Chief of Naval Staff Admiral – Sunil Lanba.
Even after nine years, the show lives in the hearts of its viewers and is loved by all. Through the show, the makers plan to inspire viewers to contribute generously towards the ‘Armed Forces Flag Day Fund’. There is also a two minute video footage showcasing a glimpse of their parade and training session.
On 7 December, TMKOC will showcase the ceremony as well as brief messages from the Defence Minter and Asit Kumarr Modi.
People can donate by clicking on the link http://ksb.gov.in/FundPayment.htm. They can also celebrate this day by wearing the flag representing the three services between 1 – 7 December. These flags are available at all government offices. Wearers can also post videos and images of their appreciation for the armed forces under #ArmedForcesFlagDay .
There is a special fund – Armed Forces Flag Day Fund, where contributions are collected and used for rehabilitation and welfare of war widows, children of martyrs and disabled soldiers.