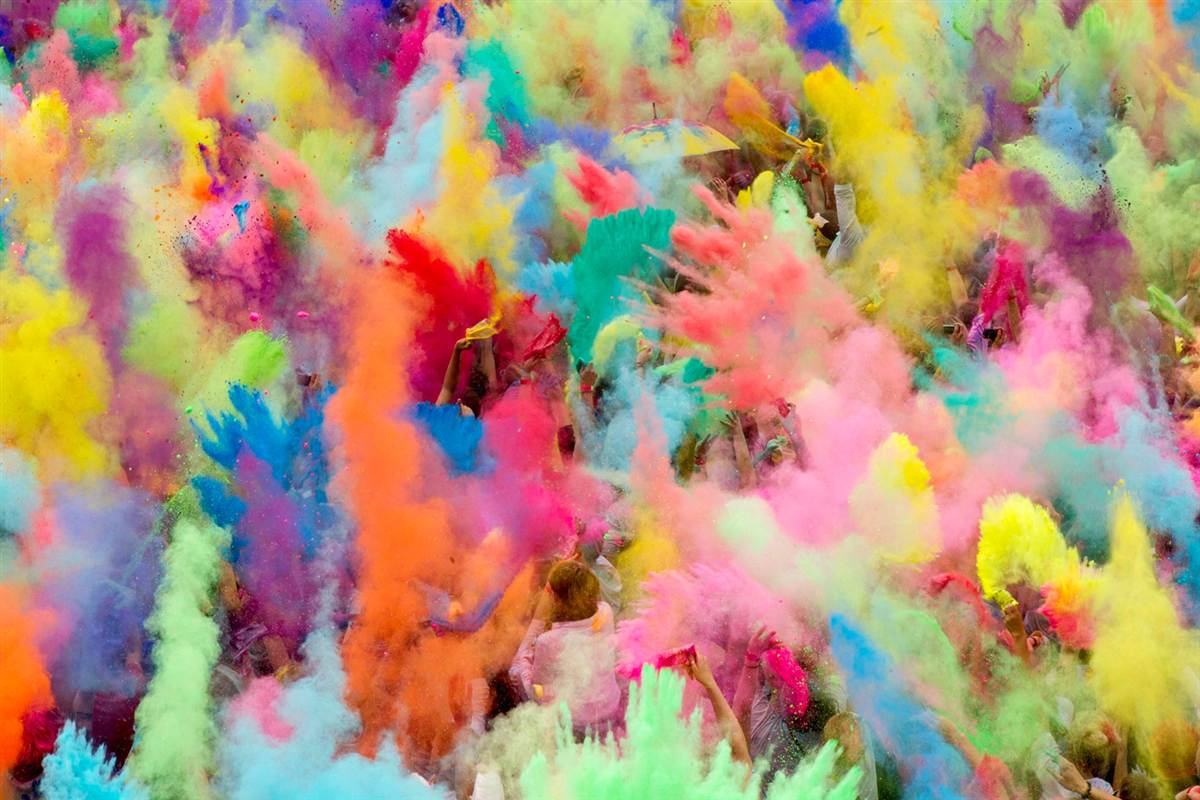 Holi is a spring festival also known as festival of colours, and sometimes festival of love. It is an ancient Hindu religious festival which has become popular with non-Hindus in many parts of South Asia, as well as people of other communities. It is primarily observed in India, Nepal, and other regions of the world with significant populations of majority Hindus or people of Indian origin. The festival has, in recent times, spread in parts of Europe and North America as a spring celebration of love, frolic and colours.

Holi celebrations start with a Holika bonfire on the night before Holi where people gather, sing and dance. The next morning is free for all carnival of colours, where everyone plays, chases and colours each other with dry powder and coloured water, with some carrying water guns and coloured water-filled balloons for their water fight. Anyone and everyone is fair game, friend or stranger, rich or poor, man or woman, children and elders. The frolic and fight with colours occurs in the open streets, open parks, outside temples and buildings. Groups carry drums and musical instruments, go from place to place, sing and dance. People move and visit family, friends and foes, first play with colours on each other, laugh and chit-chat, then share Holi delicacies, food and drinks. In the evening, after sobering up, people dress up, visit friends and family. It is a national holiday in India.

Holi is celebrated at the approach of vernal equinox,[5] on the Phalguna Purnima (Full Moon). The festival date varies every year, per the Hindu calendar, and typically comes in March, sometimes February in the Gregorian Calendar. The festival signifies the victory of good over evil, the arrival of spring, end of winter, and for many a festive day to meet others, play and laugh, forget and forgive, and repair ruptured relationships.

Holi frolic and celebrations begin the morning after Holika bonfire. There is no tradition of holding puja (prayer), and the day is for partying and pure enjoyment. Children and youth groups form armed with dry colours, coloured solution, means to fill and spray others with coloured solution (pichkaris), balloons that can hold coloured water, and other creative means to colour their targets.

Traditionally, washable natural plant-derived colours such as turmeric, neem, dhak, kumkum were used; but water-based commercial pigments are increasingly used. All colours are used. Everyone in open areas such as streets and parks are game. Inside homes or at doorways though, only dry powder is used to smear each other’s face. People throw colours, and get their targets completely coloured up. It is like a water fight, but where the water is coloured. People take delight in spraying coloured water on each other. By late morning, everyone looks like a canvas of colours. This is why Holi is given the name “Festival of Colours.”

Groups sing and dance, some playing drums and dholak. After each stop of fun and play with colours, people offer gujiya, mathri, malpuas and other traditional delicacies. Chilled drinks, including adult drinks based on local intoxicating herbs, is also part of the Holi festivity.

After a day of play with colours, people clean up, wash and bathe, sober and dress up in the evening and greet friends and relatives by visiting them and exchange sweets. Holi is also a festival of forgiveness and new starts, which ritually aims to generate harmony in the society.