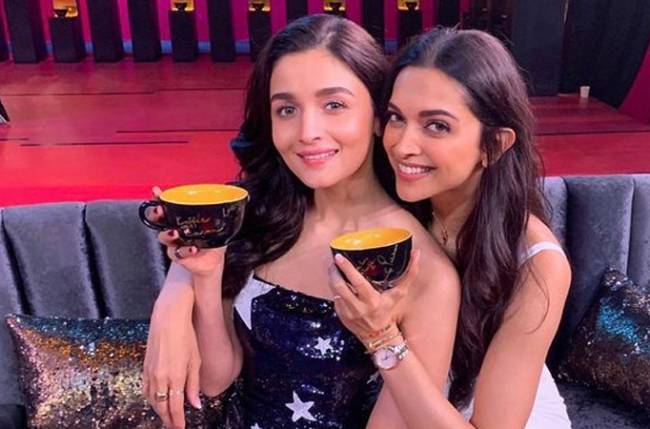 MUMBAI: The new season of “Koffee With Karan” kickstarted, rather ‘quip-started’ with plenty of girl giggles and nymph nudges to whet the viewers appetite.

Sadly, at the end of the wildly conversational carousal, I knew nothing about Deepika Padukone, Alia Bhatt and Karan Johar that I didn’t already know. Or nothing that I wanted to know. Except that Karan Johar has private Whatsapp conversations with Deepika’s fiance Ranveer Singh, which from what we gathered from the secret smiles, was proof of a secret crush that Karan harbours for Ranveer.

Well, good for them.

What happens to that crush after Ranveer weds Deepika? We weren’t told. In fact, we weren’t even told about the Ranveer-Deepika wedding which, coincidentally, was announced hours before Deepika came in the inaugural episode of the new season of “Koffee With Karan”. Deepika flatly denied any immediate marriage plans. Alia seemed willing to marry her man any time he wanted.

They also spoke about the “elephant in the room”. I got that one. Since I know Deepika dated Alia’s current crush Ranbir Kapoor (do I get the hamper for guessing this one?), I don’t know if Ranbir enjoyed being called an elephant. But we were told what he did enjoy — prying into people’s phones and reading their messages.

Curiously, all the three participants in the tripolar tete-a-tete seemed okay with Ranbir’s prying mentality.

A lot of time on the show was spent deconstructing pictures posted on Instagram by the two lovely ladies which is not the best way to spend over an hour with two of the most popular and talented female actors today. The platform was being used for a kind of Whatsapp banter where the incidents and jokes were distinguishable only to the people on-screen.

It was like a home movie being watched by thousands. We know Karan Johar is very close to most of those who matter in the entertainment industry. But the next time he plans a holiday for Ranbir-Alia and Ranveer-Deepika, could he bring us on board after the holiday so we can share in the excitement?

Right now it felt like we were eavesdropping on a conversation that didn’t prove as tantalizing as it promised to be.